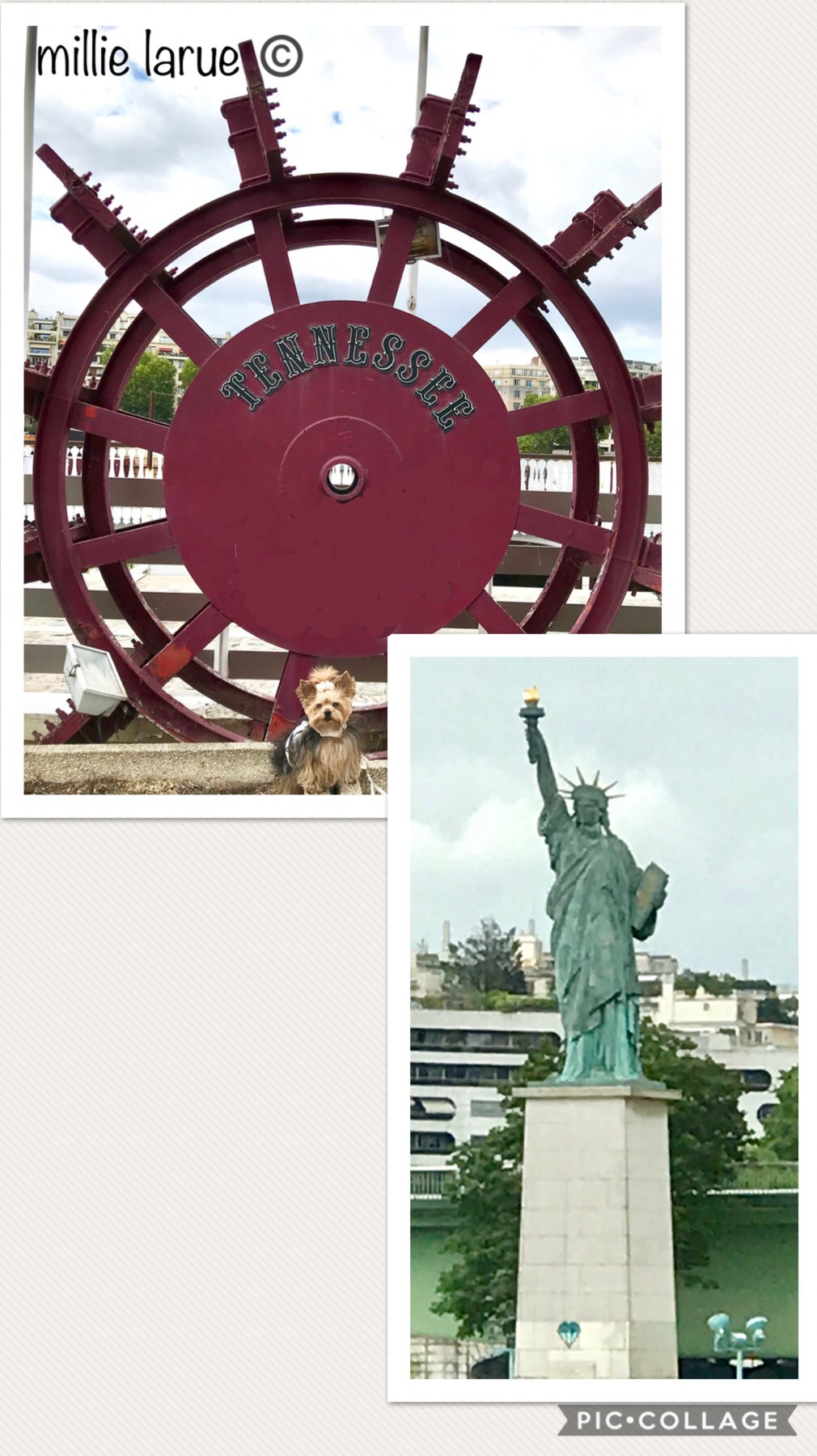 It was hard to tell on today’s outting WHERE WE WERE! As we ambled along a cobblestone street that looked a LOT like downtown Savannah, Georgia… we came across a business offering STEAMBOAT RIDES on the Seine River here in Paris!!! WHAT THE HECK? And the steamboat wheel was lettered “TENNESSEE” which is where Mummy was born!!! Goodness gracious sakes alive, as we say in the South! We walked on a little further to discover in the middle of the Seine, a tiny little replica of our own “Statue of Liverty!” It sits on the end of a tiny island called the Île aux Cygnes near the Pont de Grenelle. The statue is a 1/4-scale version of the real deal and was installed in 1889, 3 years after the original one that France made for us.  It was given to France by the American community in Paris and faces west… in the direction of her sister in New York City. You can’t climb around inside this or anything, but it’s still pretty cool to see… especially if you are getting homesick. ❤️?????

As a Tennessee resident and native too I’d be surprised to see that in France as well. Hope you are staying cool. It’s super HOT over here in TN too

My Oldest Don was born in Memphis Tennessee. We’ve both been to Parris France when he was a teen. Very nice place. I eventually went back two more times after that. Once with some German Girlfriends and later with just my Husband and I. Loved all 3 trips. Enjoy Millie LaRue. Sure are enjoying your adventures. Loving Hugs

Millie,
Tell Mummy that there is a Tennessee Restaurant/Bar on Blvd. St. Germain in the 6th. It had photos from Memphis in it as I recall. Since I’m from Knoxville (and have lived in Nashville and Memphis) I had to stop in!

That’s so cool! I know it’s hard not to be home sick. But you’re in Paris France!! Enjoy it and before you know it it will be time to go home! Then you’ll be saying I wish I could stay another day or two! ???

I love Charleston and I love Savannah….yes, I said it. I love them both. I love the Carolinas and I love Georgia. Savor your time in France and know you have a beautiful home waiting for you when it’s time to leave. God bless you both.

Hi Millie,
I’m glad you and Mummy got to see the mini Statue of Liberty. My friend Marci and I went to see it on our final night in Paris two years ago. It’s beautiful…and it’s located on the Seine River. What could be better? Plus, there’s a nice view of downtown (business) Paris from that location.

I would be confused too! goodness sakes! well maybe they like America as much as we do so they decided to have a little piece of America in Paris?