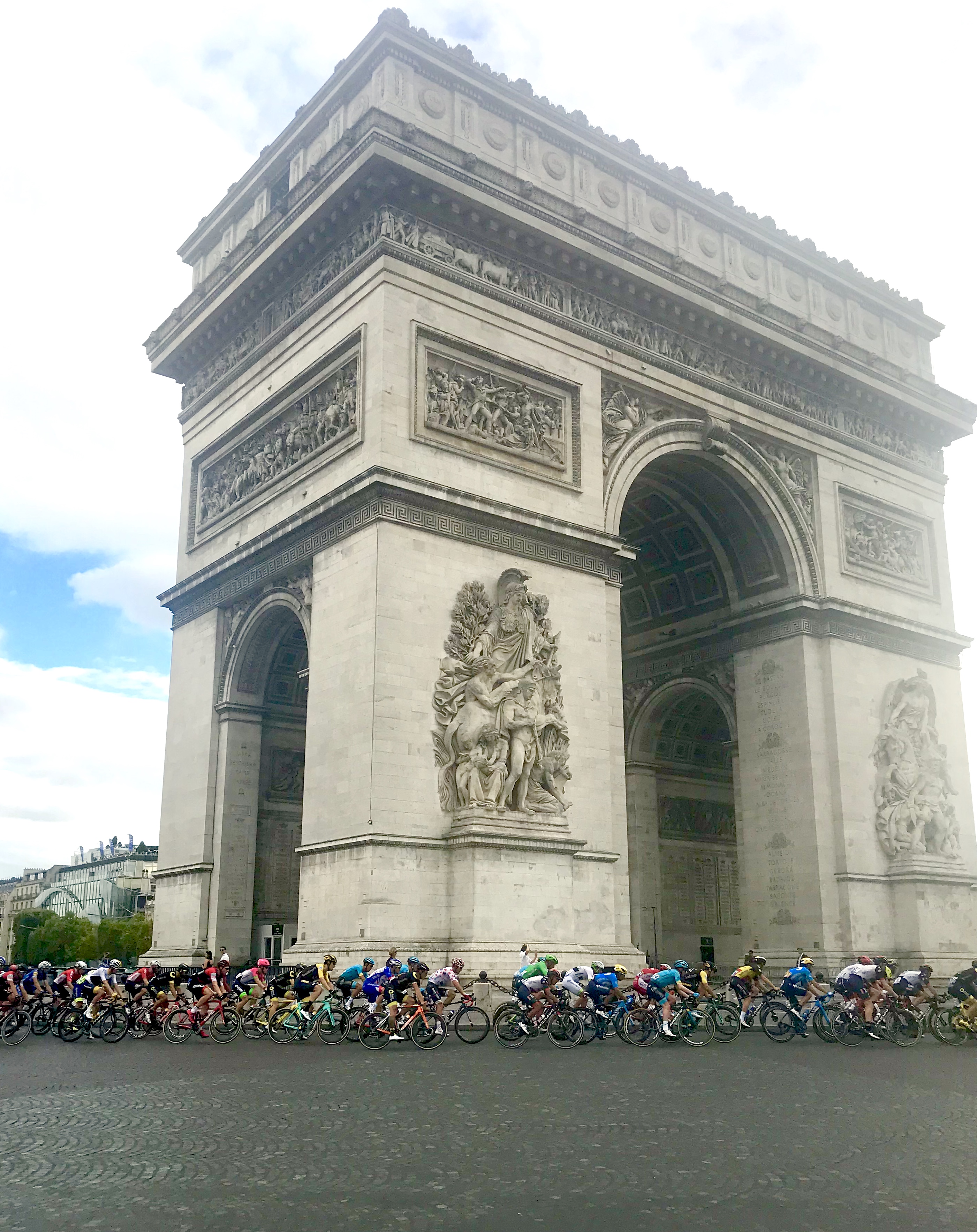 Checking Out the Tour de France!

Mummy and I headed over to the Arc de Triomphe this afternoon to watch some of the bikers as they made it to the end of their journey. Mummy doesn’t hide the fact that she is LESS THAN a sports fanatic, in fact, she doesn’t like them at all… but we are here in the interest of research. -sigh- Here are a few facts about the TOUR DE FRANCE (taken from Wikipedia)… in a nutshell:

1. It is an annual men’s event (hmmm…sexist event!!!) with 21 stages that are mostly held in France but pass every so often through nearby countries.

3. It started in 1903 and has been held every year, only stopping for the two WORLD WARS.

4. It used to be almost all French participants and gradually people from around the world began to enter until now it is a WORLDWIDE EVENT!

5.  The route changes every year but they always pass through the mountain chains of the Pyrenees and the Alps, and they circle around the Arc de Triomphe in Paris, to finish on the Champs-Élysées.

7. There are about 20-22 teams with 8 riders on each team to start… but of course they don’t all finish due to crashes, injuries and fatigue.

8. Each rider is timed during every stage of the race and the person with the lowest total time at the end is the winner… and he is awarded the coveted YELLOW JERSEY!

I like watching it for the countrysides. Some beautiful places that I most likely will not visit or see one that will draw me there.

Makes me tired just reading about the race!

Millie I like when you and Mummy tell us the history of things and have photos to go along with it! ?❤?

Agree with Ms. Donna above. Love that you include some of the history with your photos and tales of your adventures

Thank you so very much for taking the time to let us know you like our posts! These “history lessons” take a lot of time and research and Mummy wasn’t sure whether to continue with them or not. We wanted to share some of what we are seeing because we know that some people might never get a chance to see some of these sites and we are trying to give a little history in a nutshell!!! ❤️?❤️

Thanks Millie and Mummy. I always look forward to your posted photos and the history or story behind them. ?❤❤??

Thanks Millie and mommy. I love getting history lessons from you . Last year it was the USA and now it’s France. Thank you very much and I love seeing Millie in all those places too??

I love reading your posts with the history behind the picture! The Tour deFrance would’ve been so exciting to see in person!