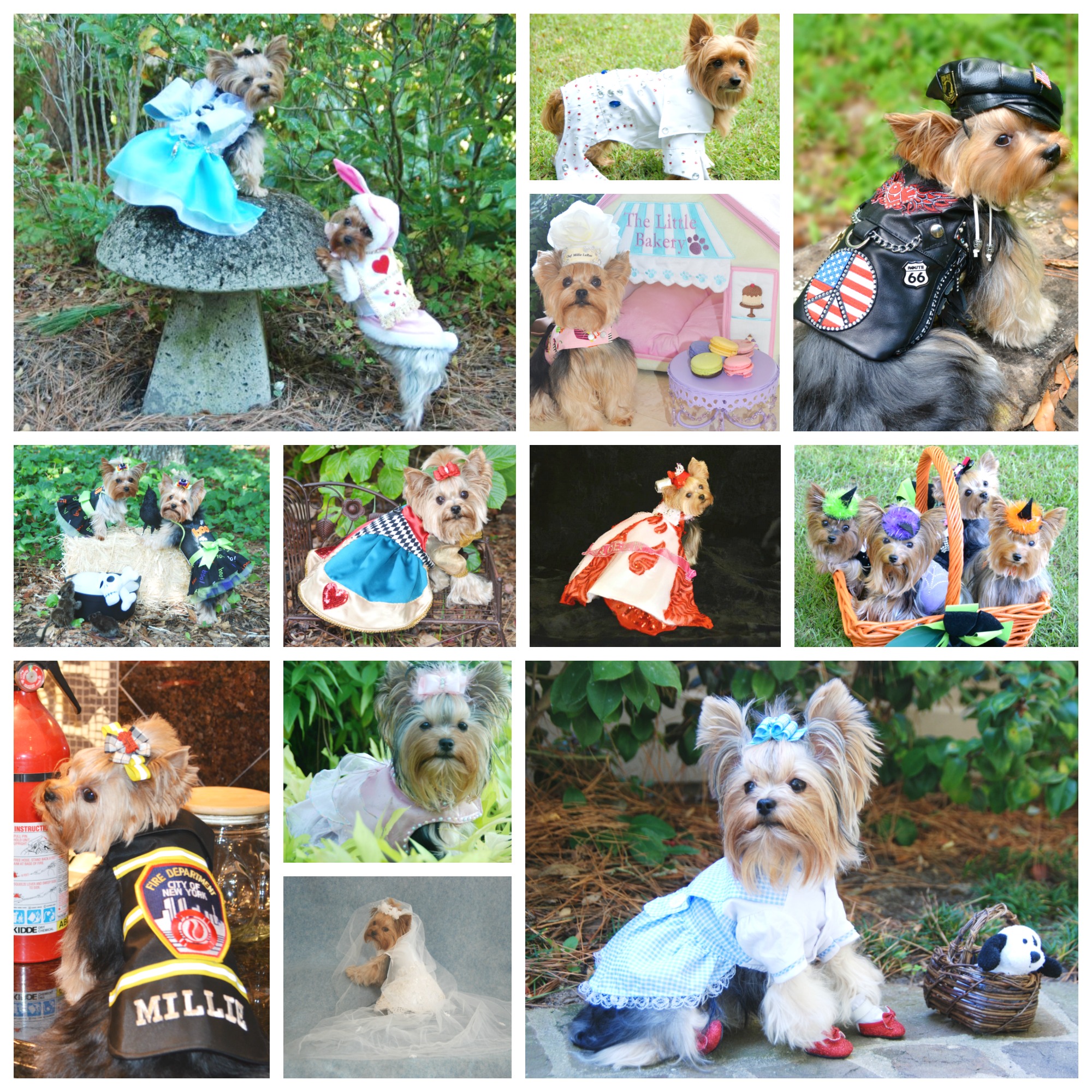 Dressing the Dog, Chapter 11-Part One

“Every single step you take can, and will change your future.  Your whole life is unwritten.  You’re the author, make your story count.”

Bri and I were spending the day in Cassadaga, Florida… the “Psychic Capital of the World,” and Mummy and I were in the middle of our 15-minute “reading” when the psychic announced that one of the spirits floating about the room had a message for Mummy concerning MY HEALTH.  The “man” spirit spoke to the psychic, and she then relayed the message to us, which was basically this:  I was going to get sick… not anything too serious but sick enough.  Huh?  I wasn’t sure what that meant… WHAT DID HE MEAN BY THAT?!?!?!  I mean, I get “sort of sick” all the time.  Just the other day I upchucked a bit of my dinner, and a few weeks before that, I had a little issue with my poo poo.  How “sick” exactly was I gonna get???  Then the spirit added, just for good measure, that one of my teeth was loose.  A bottom left tooth, to be exact.  DANG NATION… that was some pretty precise information!  I ran my tongue across my lower teeth but didn’t detect any issues, so basically, I was stymied.  The timer went off on the psychic’s stopwatch that she was using to keep track of our 15-minute “reading” and she asked if we wanted to continue for an additional 15 minutes.  Thankfully, Mummy said no.  I didn’t know how much more I could take.  I needed to talk to Bri and tell her what had gone down… and I was already feeling unwell.

We all had a creepy feeling as we left the psychic’s house… although Bri hadn’t been given any bad news.  It was getting late and we were about done with the spirit world.  We dashed back to the “haunted” Cassadaga Hotel where they had set up a little Halloween display.  After posing for a few pictures, we were done.  There were street signs posted around town, warning people to be INDOORS by 8pm.  Or what?  What happens when it gets dark?  We didn’t really want to find out so we were out of there with daylight to spare.  Our next stop was Orlando… to visit an RV dealership and look at some AIRSTREAM trailers.  Mummy recently had the grand idea that our family should get a trailer and start traveling together across the USA.  I was the only one who behaved well enough for AIR travel, but she really hated leaving everyone behind all of the time… so having a TRAILER seemed like the perfect answer.  We wouldn’t have to worry about “pet friendly hotels” because we would have our OWN HOTEL ON WHEELS!  It was perfect.  And an AIRSTREAM was what she wanted.

Ms. Sandra found a place in the Orlando area with several models on the lot.  It would be our first time to ever set foot inside an AIRSTREAM so it was very exciting.  I must mention here that Daddy had NO IDEA any of this was even taking place.  He was sitting at home with my sisters, blissfully watching TV… with not an inkling as to how our lives were getting ready to change!  We arrived at the RV dealership and stood in the lot, amazed at the number of AIRSTREAMS we would need to tour, and we would tour them all.  Mummy thought that the smallest one was the cutest, so that was where we started… it was called a “Bambi” and was only 16-feet long.  The interior was adorable and everything was very compact.  VERY!!!  Mummy located the bathroom behind the only interior door and stood silently studying the room. Inside the tiny room was a toilet, teeny sink and shower hose dangling from the wall.  What WAS this?  Ms. Sandra told her that it was called a “wet bath” and served as the toilet AND shower area… all in one.  Hmmm, I didn’t know about this and Mummy wasn’t so sure either.  Maybe the SMALLEST trailer wasn’t the one we needed… so we moved to the next size up.  We spent several hours going in and out of AIRSTREAMS until Mummy felt she had a good handle on things.  There weren’t any dealerships near us, so Mummy would start checking on-line for the PERFECT trailer once she had Daddy excited about the plan.

We kissed ms. Sandra and Bri goodbye and headed back home.  Halloween was just a few days away and we needed to get our costumes ready, and put the candy by the door for the trick-or-treaters.  Every year Mummy had a different costume for me to wear.  Sometimes ALL of us would dress up and sometimes it was only me, since I was the one who usually answered the doorbell.  Elvis was always the same thing… he was dressed as “Elvis,” of course.  But it hadn’t always been this way!  Many years ago when Mummy didn’t dress her furbabies AT ALL, my brother Paul wanted to get a Halloween costume for Sophie.  Mummy thought that was the silliest thing she had ever heard of!  Paul suggested dressing Sophie in a cute clown costume that he had seen at Walmart for twenty dollars.  TWENTY DOLLARS!  “Are you crazy?” Mummy said.  “For something she will wear ONE TIME?”  Paul insisted on getting the costume and Mummy finally relented… and Sophie was a clown for Halloween.  The following year, Paul announced again that Sophie needed a Halloween costume and Mummy reminded him that she already had a CLOWN costume.  “MOM!  That’s what she was LAST YEAR!”  OMG!!!  Mummy told him that Sophie wouldn’t have any idea that she was wearing the same costume… she could be a clown again, but Paul INSISTED on getting a new twenty dollar costume and Sophie was an angel that year.  Little did Mummy know, that several years later, she would be ordering CUSTOM MADE Halloween costumes and getting us something new EVERY YEAR!!!  Ohhhh, how things had changed since Mummy had started DRESSING THE DOG!

With Halloween over, Mummy focused on her AIRSTREAM plan.  To say that Daddy was SHOCKED would be an understatement, because as long as he had known Mummy… she had refused to go camping, in any form.  This camping/outdoor-aversion stemmed from TWO dramatic incidents that happened in the early years of their courtship.  The first occurred during an afternoon kayaking expedition with Daddy (her then boyfriend) and Daddy’s brother and his girlfriend.  Daddy and his brother were avid kayakers… and so was the girlfriend.  Mummy, not so much.  In fact, Mummy was really only skilled at lounging around swimming pools and was never a “sports enthusiast”… but in order to score some points with Daddy, she agreed to go on the afternoon trip even though she had never been in a kayak in her life.  It was the middle of March, and it still very cold outside.  It was also drizzling rain that day, as in… not a ray of sunshine.  The kayak they were using was a 2-man kayak that would normally have a tarp over the top but there was no tarp, so basically it looked like a 2-man canoe.  Daddy wanted to show Mummy how he could “surf” the kayak up against a tiny waterfall and let the suction of the falls pull the boat toward the falling water without capsizing them. Hmmm. To make a long story short, the kayak was sucked into the falls and instantly filled with water… leaving it barely visible beneath the surface.  The only thing they could do was swim out of the boat and paddle to shore, where the kayak was turned over and emptied out.  They were miles and miles from where the pick-up car was located downstream. (Deliverance music is played at this point.) The water was freezing cold, the air was freezing cold and Mummy was soaked from head to toe.  The boat was righted, they got back in and started paddling downstream… but it would be hours before they reached the car.  Mummy refused to paddle another stroke and cried the entire way back… and that was the LAST trip she ever made in a kayak.  She was 16-years old.

Dramatic incident number TWO.  Again, DADDY… wanted to take Mummy camping with another couple… for just one long day.  They would have a picnic lunch and a big dinner cooked over an open fire and then come home. –SIGH- Mummy really didn’t want to go but she was trying to show Daddy how ADVENTUROUS she was, and OK, basically… she didn’t want him to take another girl… so against her better judgment, she went.  Again, it was COLD outside and OVERCAST.  Honestly… can’t Daddy pick better days for outdoor activities?!?!?!  Things were going OK until it was time for dinner.  The sun had set and it was REALLY COLD but the boys had built a roaring fire and Mummy decided to hang out close to the flames in order to stay warm.  The bad thing was… she got a little TOO CLOSE to the fire and the bottom edge of her frayed blue jeans caught on fire and before long, the whole cuff was blazing!  They always tell you to STOP, DROP & ROLL.  But when you are on fire, Mummy says that your FIRST INSTINCT is to RUN… and that is what she did.  She took off running into the woods where Daddy had to chase her down, with his friend following in hot pursuit… and the two of them tackled her like the football players they were, darn near knocking her unconscious!!!  The flames were extinguished but a HUGE second-degree burn soon appeared.  WOW, this was not looking good.  Mummy was living in the college dorm at the time, and if her parents found out about this, she would be in soooo much trouble and Daddy might be in trouble too.  The decision was made to stop by a pharmacy on the way home and Daddy would go inside and tell the pharmacist what had happened.  When he suggested taking Mummy to a hospital, Daddy said that was NOT an option…. so all sorts of creams, ointments and bandages were piled on the counter with instructions on wound care.  With diligent cleaning, it healed up nicely and Mummy’s parents never found out about the incident!!!  But… she was 17-years old, and since then, she has NEVER CAMPED AGAIN.  Now she was asking Daddy to get a trailer so we could all go camping… and better yet, she had FOUND ONE on an E-BAY auction.  AMAZING is the word for this turn of events!!!  They needed to act fast because the auction was ending soon.  I sat there beside her, staring at the computer screen, looking at my future… a shiny little AIRSTREAM trailer.  We were just one-bid away from owning it!