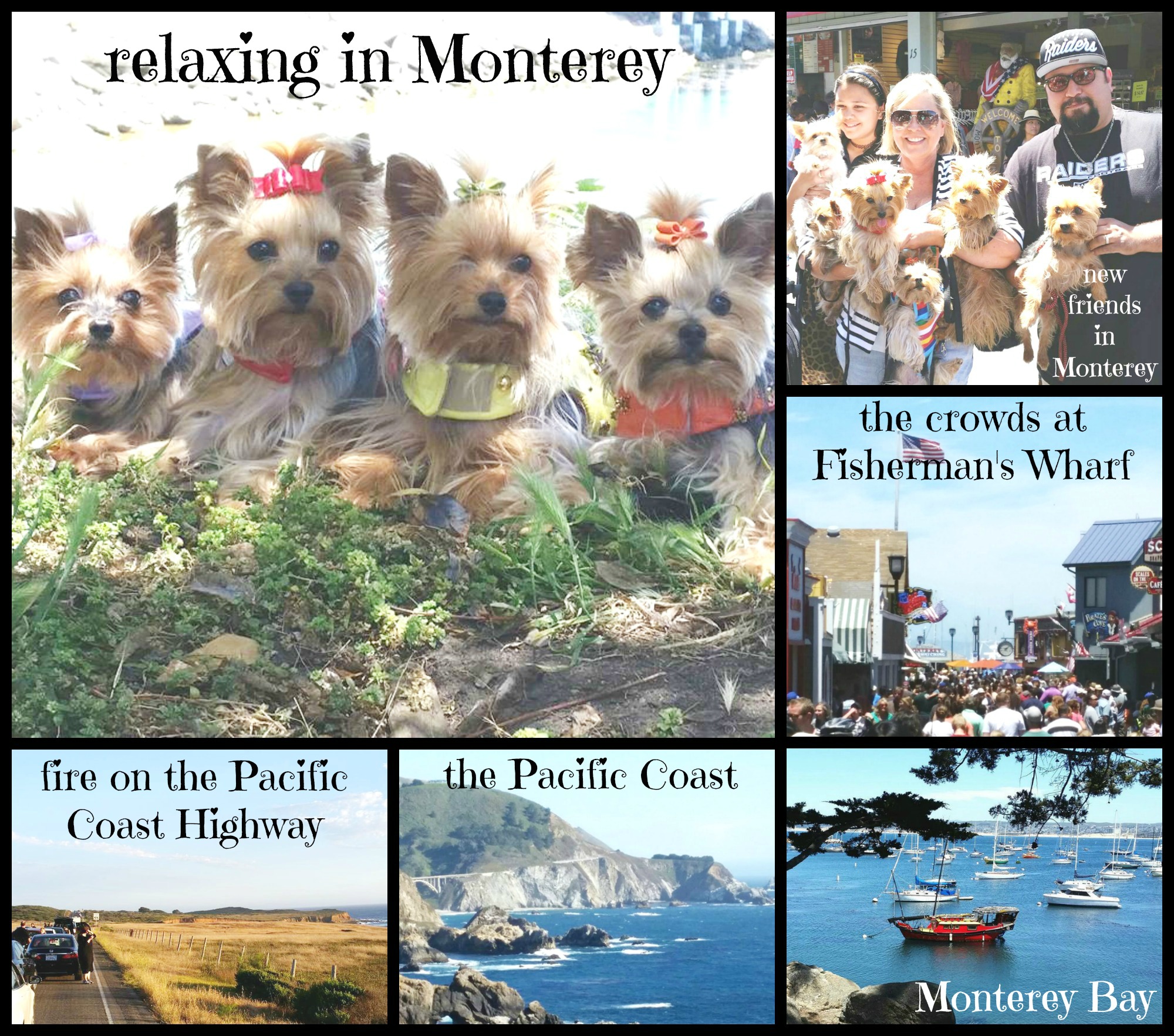 California was beautiful, that’s all there was to it.  It wasn’t just MY opinion either, Mummy was smitten with the state too!  She had been telling Daddy that she could be perfectly happy living in a tiny little cottage perched on a cliff overlooking the deep, blue Pacific Ocean.  Daddy told her that her “little cottage” would set him back about five million dollars and asked if she could be happy in an “adobe hut” in Death Valley?  The land there was much cheaper.  He could get her something THERE.  A DUPLEX even!!!  Mummy rolled her eyes and got out the fixings for a Cosmo… reaching for Daddy’s REAL ICE and smiling at him as she “clink-clinked” the cubes into her martini glass.  She’s brave.  While the four of us yorkies took a nice break outside in our x-pen, the parents mapped out a plan for the day.  Daddy wanted to drive up to Monterey, following the winding Pacific Coast Highway to get there.  There are some fantastic views over the cliffs toward the ocean and then up the mountain on the other side.  We would eat lunch somewhere in Monterey and then head back in time for dinner.  That was the plan anyway.  But as usual, things didn’t go exactly as planned.

The drive along the Pacific Coast Highway was nothing short of SPECTACULAR!  I lost track of how many times we pulled over to take pictures and just stop to admire the view.  The ocean stretched out forever in every shade of blue that you can imagine, and as it rolled up to the rocky cliffs, it crashed against the rocks with such force that water sprayed up in the most magnificent fountains!  It was like the Fourth-of-July, except instead of fireworks, it was all done with WATER!  It took several hours to drive to Monterey because the road was only 2 lanes and it was full of twists and turns… you had to drive carefully and keep your eyes on the road.  There were plenty of people who were out enjoying the sights, but others were in a hurry to get from point A to point B, and those were the ones to be careful of!  They were trying to pass the slower cars on the straightaways, and the near-miss collisions were about to give Mummy a heart attack!  She kept turning around to make sure we were securely buckled into our carseat.  Man… now we were ALL getting nervous.

By the time we arrived in Monterey, we were ready to get OUT and shake off the jitters!!!  We headed for “Fisherman’s Wharf” where there were lots of outdoor restaurants and little shops for Mummy to explore, but GETTING THERE was no easy task.  As usual, four little yorkies walking down the sidewalk in cute little matching harnesses tended to draw a crowd, and we had to keep stopping for pictures.  Mummy told Daddy that if we had a STROLLER it might be a little easier because we wouldn’t be so noticeable and we would be contained in one place!  There was probably even a PET BOUTIQUE around here somewhere that SOLD STROLLERS.  No.  That was his answer.  We don’t have room in the truck for a stroller.  –sigh-  “What about the chest harness?” she asked.  No.  He was NOT putting that thing on again.  Mummy said it was much easier to carry one in the harness and walk the second one, so she continued to use hers… but Daddy steadfastly refused, so we were destined to either WALK or be CARRIED under an arm when Daddy was in charge of us. When we reached the boardwalk that headed out to the pier, you would have thought that the Queen of England was in town or something!  Everyone and their brother was there!!!  There was NO WAY that we could safely WALK in that kind of crowd, so Mummy and Daddy picked ALL of us up and started to make their way through the masses.  Carrying us didn’t help too much either, because people could still see that there were four little adorable (if I do say so myself) yorkies dressed in fashionable attire, headed out to lunch.  There is just NO WAY to “sneak around” when you are traveling with four little doggies… this was something that my parents had never considered when planning our BIG WESTERN ADVENTURE.  Have I mentioned yet how hot it was outside?  Well… it was HOTTER than Peter Piper’s peppers, let me tell you.  Mummy was beginning to perspire, Daddy was sweating like a pig, and we weren’t feeling all that great either to tell you the truth.  Being held under someone’s hot arms isn’t exactly the most “refreshing” feeling… in case you ever wondered about this.  All of the outdoor restaurants had a “waiting list” and Daddy had reached the END of his patience reserves.  We had come to the end of the pier and Mummy suggested we walk back to the truck and find somewhere else to eat lunch… well, it would have to be an early dinner because lunchtime was almost over by this point.  Daddy grumbled, but agreed, and we high-stepped it back and headed over to Carmel-by-the-Sea.

OH MY GOSH what a charming little town!!!  Mummy was IN LOVE AGAIN.  Maybe she could live HERE, she proclaimed!  Daddy said it was WAY TOO CROWDED and the streets were TOO NARROW and he could HARDLY BREATHE.  OK, we needed to get some FOOD into Daddy… he was having a meltdown before our very eyes.  We had barely stepped onto the sidewalk and were headed to the first restaurant that Mummy saw when Daddy LOUDLY stated that he was not interested in seeing anything here.  Nothing.  He was hot and tired and just wanted to quit for the day.  SAY WHAT?!?!?  Mummy stood there holding her two doggies under her arms and looked toward the sky for a lightning bolt to come down and strike Daddy on the head.  Just kidding… sort of.  For several seconds the world seemed to stop, and then all Mummy said was… “fine.”  RUH ROH.  As fast as we had exited the truck, we were all being REPACKED into our carseat and now found ourselves on the Pacific Coast Highway, headed back to Paso Robles to our AIRSTREAM.  There was no talking on the way back.  No radio and no Facebook connection to keep Mummy occupied… nothing but air and endless ocean.  Mummy took advantage of the view and mentally transported herself into a tiny little rowboat only big enough for ONE HUMAN and FOUR YORKIES…way, way out in the middle of the Pacific Ocean.

We drove along the coast for over an hour in total silence… and then we stopped.  I mean we came to a FULL STOP in the road because cars were backed up in front of us as far as the eye could see.  There were no cars coming towards us in the oncoming lane either.  This didn’t look good.  There were only TWO lanes on this road and there was no way OFF of it other than to turn around and drive BACK to Carmel-by-the Sea and take an alternate highway to Paso Robles.  It was already 8pm, and from where we were right now, we were only half an hour from our trailer.  We were also almost out of gas.  Everyone was getting out of their cars and someone on a motorcycle had driven to the front of the line to see what had happened.  The report came back that two cars had crashed head-on while one was trying to pass another car.  One of the cars had caught fire, which then caught the surrounding brush along the road on fire.  So not only were the police and ambulance there, but the fire department was there as well.  The wreck had occurred hours earlier so the hope was that the road would open up soon, it was just a guessing game as to WHEN that would happen.  Some people were turning around and going back to Carmel, but some of the locals said it was best to just wait it out… the sun was going down and it was not really SAFE to drive on this road at night if you weren’t familiar with it.  That’s all we needed to hear.  We were just going to wait.  Mummy knew that Daddy was wishing he had stopped for lunch but she didn’t DARE say anything… but it was way past OUR dinnertime and there was NO FOOD in the car and only a little bit of water!  I thought that perhaps we should start rationing what little bit of water we had, and perhaps start digging around to see what food we could find in the pockets of the truck.  Maybe there were some hidden snacks that we had forgotten about!  I could feel my body going into starvation mode.  All of us were going to lose weight and none of our harnesses would fit… we would need to have them taken up ASAP!  We couldn’t be expected to walk around in saggy clothes.  My mind was working overtime on WHERE we would find someone in Paso Robles who could do doggie alterations when the cars ahead of us started to move.  JEEPERS… we were saved!!!  We rolled into our campground well past midnight and Mummy got our dinner prepared in record time.  As for her and Daddy, they fixed a quick sandwich and ate in silence.  Oh, the joys of family vacations.  We were leaving in the morning for our next location… Coarsegold, California, but before going to sleep Daddy winked at Mummy and said, “How about I take you panning for gold this week?  Maybe we’ll strike it rich and I’ll get you that cottage overlooking the ocean.”  Mummy half-way laughed and fixed herself a glass of water with a few of his REAL ICE CUBES.  Clink Clink.

Oh my goodness. So glad you girls got to eat before you withered away.

Ohhhh the food was sooo fresh and delicious too! ??

Millie, I have similar tastes as your mommy. I love Monterey and one of my very favorite places on American soil is Carmel-by-the-Sea. That area is someplace that you have to stay and savor for at least a week or more. The scenery, the shops, the beautiful homes, the golf courses, the food…well, everything. I would love to live there too, but I do not own a bank. Daddy is right, $5M would be on the lower side of the real estate market anywhere along that coast. Nonetheless, it is beautiful indeed. You wouldn’t take up much room, so you… Read more »

We just loved ALL of California! ??

ahhhh I’m pretty sure you weren’t going to waste away before you got to the trailer.. and traveling is very stressful! I personally don’t like being caught in traffic. ugh!