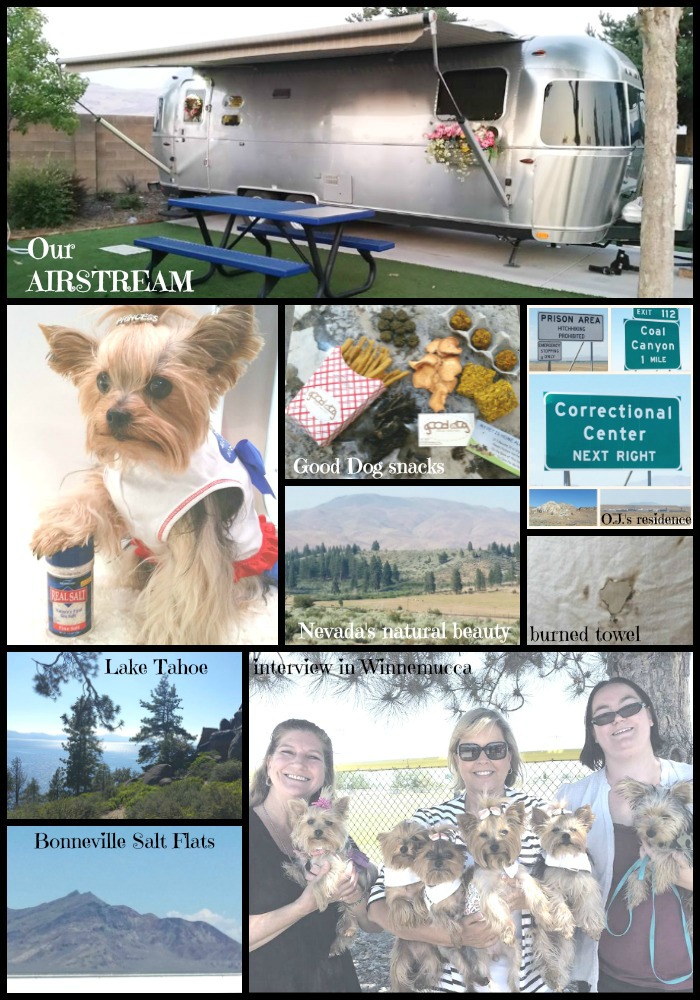 We were on our way to the Bonneville Salt Flats, but we weren’t really sure what that was.  When you looked at a map and stuck a pin in the spot “where you were right now” and drew a line to “where you were going” it never looked so bad, but let me tell you something right now, that pencil line is a whole lot longer on a REAL ROAD!  And if Katie asked one more time, “Are we there yet?” I was gonna trade her in for some beef jerky at the next roadside outpost that we passed.  Seriously, she was plucking my last nerve and she was barking every 30 minutes to “go potty” when everyone knew that she didn’t REALLY need to go… but Mummy and Daddy were afraid to NOT STOP because of her past history, and she knew it.  She just wanted to get out and walk around, but it was holding us up… we were like her travel hostages and everyone was starting to get cranky.  Well, everyone except Katie.  She pranced around with this smug look on her face that really made me want some beef jerky… BAD!  We had driven past Lake Tahoe earlier in the day and stopped to take pictures of the spectacular view, then met some Facebook friends for breakfast… but now lunchtime was approaching and we were trying to get to Winnemucca, Nevada where a most important stop was being made.  Our friend, ms. Lori Payne with “Good Dog Treats” lived there and she had a fresh supply of her homemade snacks for us, which was a good thing because we had run out.  I’m talking a crisis situation here!!! If Katie realized how vital it was to get to Winnemucca she wouldn’t be futzing around with all of this “fake potty” business, but I don’t think she knew that WE WERE OUT OF SNACKS!!!

The road continued to rumble beneath us and we were soon lulled to sleep… thump-thump, thump-thump, thump-thump.  The sound of the wheels on the road was intoxicating after hundreds of miles, and even Katie eventually got tired of her “potty” game after a few hours.  Suddenly Mummy yells, “WAIT! What was that sign?” Did that say Lovelock prison?” Daddy kept driving as was his usual nature.  “TURN AROUND!” cried Mummy.  “I need a picture of that sign!”  Oh no… here we go again.  Daddy kept on driving, full speed ahead while Mummy pleaded and begged for him to turn around, but this time… there really WASN’T anywhere to turn around!  We were in the middle of  nowhere, man… like the moon!  There was not another car on this road going in either direction and no off-ramps, no cut-through, no way back. “PLEEEAAASSE,” cried Mummy.  Then it all came pouring out… “That’s where O.J Simpson lives!!!”  We all looked at each other… “Who?”  Daddy laughed and laughed as Mummy tried to explain the story.  Now first, I have to tell you this funny thing about Mummy.  Mummy hates sports.  ALL sports.  But apparently, way back in the day, this guy named O.J. Simpson used to play football and he was the ONLY guy that she would watch or knew anything about.  She watched all of his games.  When he stopped playing football, he started doing commercials on TV, where he ran through airports for some reason… and she watched those commercials too.  She really loved O.J.  Then… years later, he was accused of killing two people and was found not guilty, but most everyone felt that he did it and got away with murder. YIKES!  More years go by and somehow he gets roped into something totally unrelated to the previous murder, and sent to jail.  Some people say he was railroaded into the jail time but no one really cared too much because they thought he should been strung up for the two murders in the first place… but I’m just a little doggie and wasn’t even born when all of that happened.  Mummy had always liked the guy… until the murder thing, and then when she heard it on the news she had screamed out, “O.J. – NOOOOOOOO!”  Anyway, here we were, decades later, passing by the prison where O.J. was locked up and she wanted a picture of the prison sign… and Daddy was saying no.  So Mummy started crying.  She cried for a good 5 miles until we finally came to an off-ramp, and I’ll be dad-gummed if Daddy didn’t turn that AIRSTREAM around and drive her back for that picture.  I was really proud of my Daddy for turning around like that, because it was a long way back to that PRISON sign… but I had to give props to my Mummy too… for crying for 5 solid miles without letting up. You have to hand it to someone who has a plan and sees in through to the end, even though a positive outcome looks bleak.  And not only did Daddy take her to the sign on the road, but he drove up into the prison AREA so she could get a long distance picture of the actual PRISON ITSELF!  Daddy said, “I bet that O.J. Is looking out his window right now saying, ‘I wonder who is parked in that big AIRSTREAM over there?’”  Mummy cut her eyes over at him and said, “Ya think?”  Daddy told her to hurry up and take the picture before we were ALL thrown in jail WITH O.J. for suspicious activity!  In two shakes of a hen’s feather she had her pictures and we were outta there.  WHEW- I was getting nervous for a second.  I am on a special home-cooked diet and wasn’t real sure if the prison chef would be able to prepare my meals EXACTLY to my liking.  Also,  despite my humongous wardrobe, I don’t have one single ORANGE harness… just saying.

We stopped for lunch with ms. Lori Payne and even did an interview for a local newsletter.  They asked about our cookbook and how we were raising money for a few RESCUE GROUPS with part of the proceeds.  We told them we had sold several dozen on this trip alone, and they were also for sale in our on-line BOUTIQUE for anyone else who was interested.  They made perfect gifts too, and it was extra special knowing that you were helping pups in need.  With our tummies full and our cupboards restocked with “Good Dog” snacks, we kissed goodbye and headed to our campsite for the night.  It would be another quick stop because we needed to get to Park City, Utah by the next afternoon.  When the sun came up in the morning, we didn’t even know what day it was!  Goodness me, we were driving way too much and not getting enough rest.  We would NOT make this mistake again, I can tell you that!!!  The trip was just too long and complicated to try and rearrange it at this point, but it had been our first big trip and the first big lesson we had learned.

Our silver AIRSTREAM flew across Nevada and into Utah like a speeding bullet and we were soon mesmerized by a shining light that seemed to glow all around us.  Flat, glistening land…reflecting the glare of the sun.  But WHAT was it?  Where were we?  We didn’t have to wait long to see the sign:  Bonneville Salt Flats  WOW… this was where they held the big car races… right here on this hard-packed salt!  Even DADDY had to see this for himself, so we pulled into a big parking lot and everyone got out to see what these salt flats were all about.  Mummy lined the four of us doggies up and held the FIRST EVER (that we know about) YORKIE DOGGIE RACE at the Bonneville Salt Flats… and I won!  We all got our paws rinsed off real good with some fresh water, to remove any salt residue, and piled back into the truck… we were almost to Park City… which meant we were about to see our friends: Georgia, Corinne and Priscilla of OWNED BY YORKIES!

We stopped off at the "Bonneville Salt Flats" in western Utah, for the FIRST EVER YORKIE SPEED RACE! I don't know if we broke any SPEED RECORDS, and we didn't draw much of a crowd since noone but us was there… but it was nice to get out and stretch our legs. They even have a "foot wash" station here for washing the salt off your feet. We took advantage of that and made sure our PAWS were nice and clean because Mummy said that salt can hurt our paws if we don't wash it off. We got plenty of nice cool water after our race and now we are hitting the road for Salt Lake City!!!

I LOVE seeing you girls running around – in a few different directions. It brought back memories of the “Field of Dreams” last year! LOL!!!

I am reading a really cool book called “smoky the Brave”. It’s about an amazing little WWII Yorkie hero. It’s a wonderful true story that reinforces the loyalty, strength and determination of these sweet little creatures. If you ever get a chance to find it, snap it up and give it as a gift to daddy. He will love it. Great Christmas gift for anyone or to add to your boutique. It is written by Damien Lewis. Millie’s attitude and determination to live after her horrible encounter is the same as this little guy Smoky. A testament to the strength… Read more »

And I do have to ask — I see a pic of a burnt towel but I must have missed how it happened. So, who threw the towel in the fire??

I have to say you moved across the country and back at an amazing pace! I can see why it would be exhausting as I have traveled to Florida and back and took more stops than you! LOL I think traveling with your own camper is the BEST possible way to travel! You sleep in your own bed each night, you can make your own food along the way, it’s not near as noisy, and you can all stay together and not worry about those “pet friendly motels”! ugh!

Those girls sure look cute racing on the Bonneville Salt Flats. So glad you washed their little paws afterward! So precious!

What an amazing story in real life air streaming, keep on trucking and sharing .

Thank you! We have REALLY enjoyed our AIRSTREAM ADVENTURES and it’s the BEST WAY to travel when you have 4 little princess dogies like us! We have a second home on the road and NO RUDE HOTEL PEOPLE to deal with saying… “NO DOGS!”

I am loving this story!!!

I’m catching up with my readings… And having a blast!!!! Loveee it!!!

Mummy needs to help me write more chapters!!! We have taken a long break but we should have an update in a few days! ?❤️?