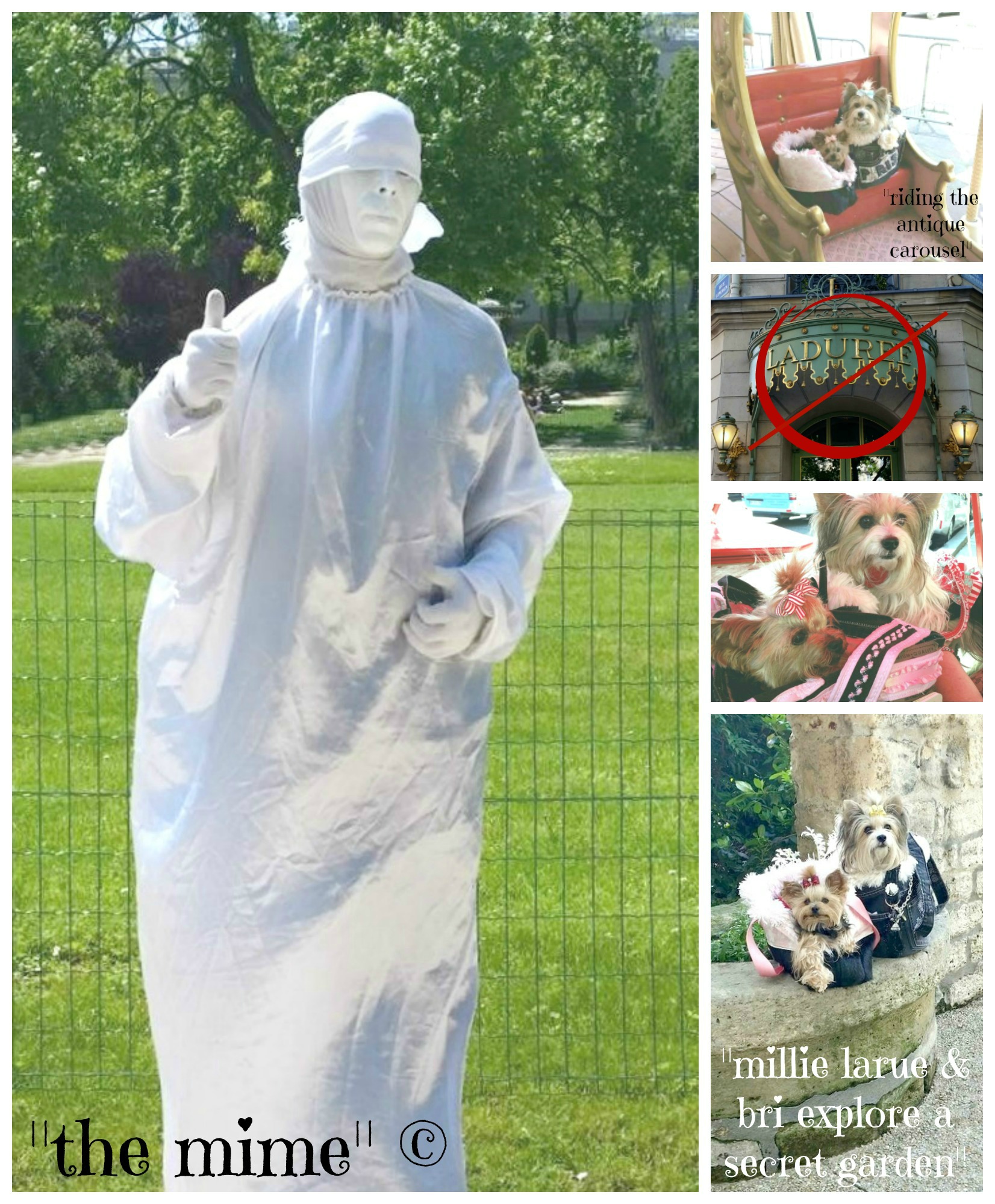 We were spending some down-time in a little park area next to the Eiffel Tower, and had become spellbound as we watched a mime walk up and choose a location to begin his performance.  He had set himself up on a little milk crate and covered the crate with a white dish towel… probably one that he took from his Mummy’s kitchen.  He was dressed all in white, his face was painted white and he had tied a white blindfold across his eyes.  This was looking “curiouser and curiouser.”  The four of us sat mesmerized while the whole procedure took shape.  What was his act anyway?  The only way to find out was to drop a coin or two into the little metal bucket that he had set beside his covered milk crate.  Since he was blindfolded, we were all guessing that after he heard the sound of coins in the bucket, he would spring to life with some sort of elaborate mime number that he had learned in acting school… but we were really guessing here!  We waited in the shade of the Paris Plane trees for his first customer to show up, and it didn’t take long.  PLINK PLINK went the sound of two coins.  THE MIME BEGAN TO MOVE!  Still blindfolded, he slowly swayed to life and gave the “thumbs up” sign.  That was it.  THAT WAS IT?!?!?!  Come on man!  That’s all you’ve got?  Holy rip-off Batman!  I can do better tricks than that even with my limited training from PetSmart!!!  A “thumbs up” sign?  I can wave hello or goodbye on command, which I’m betting would get a LOT more smiles than the “thumbs up” just got from his current customers.  They waited around for a few seconds for something else to happen, but the mime went still.  The show was over folks… move along.  The mime stood there for several more minutes and no one else came along.  I think word was out that he was a phony mime.  He kept lifting up his head and peeking out from under the blindfold to look around.  Maybe he was checking to make sure no one ran off with the money from his bucket… after-all, the “survey-takers” weren’t far away and I’m sure he knew all about their shady dealings.

Mummy sprung into action and decided that this would be a really cool Paris photo… one of me with the mime!  I was on-board with the idea because really, when would I ever be near a mime again?  Never.  So I thought this would be a frame-worthy picture, for sure.  She cautiously approached the mime, not wanting to startle him since he was blindfolded and all.  “Excuse me,” she said very nicely.  “Could you please hold my little dog so that I can take a picture?”  The mime stood rock still and then slowly lifted his head to peek beneath the blindfold and get a look at us.  He resumed his stoic stance and shook his head, NO.  Hmmm.  Mummy checked his money bucket and he was gonna have to do a LOT better than that to earn enough for even a CROISSANT.  “I’ll pay you,” she said.  “She won’t bite you.  She’s very nice.”  Again, the mime shook his head NO.  Man, this was one tough mime.  “Awwww man, come on!  Just a quick picture.”  The mime lifted his head so mummy could see a glimmer of his eyes and he spoke, just two words, “No, madame.”  Mummy started laughing because even she knows that the first rule in MIME SCHOOL is that you CAN’T TALK!  I bet he didn’t even GO TO MIME SCHOOL!  I mean anybody can do a “thumbs up” sign… you don’t have to be a mime!  Mummy dropped a coin in the bucket so she could get a picture of the crazy nut doing his dumb act.  He could have made a lot more money if he had just held me.  Maybe he should try holding doggies and babies… it might increase business around his milk carton.  We sat and stared at him for a few more minutes and I think he could feel our negative energy or something because he packed up his milk carton and his Mummy’s tea towel and walked off, looking for greener pastures I suspect.

We had rested enough and our moms were ready for an afternoon snack.  Tea and macarons sounded perfect and one of the most famous places to get them wasn’t too far away.  We passed a lovely antique carousel on the way and the four of us took a few spins on that… how exciting!  Mummy and Ms. Sandra were counting their steps on their “fit bits” but Bri and I were being carried most of the time… this was THE LIFE!  In no time at all, we were walking up to the Arc de Triomphe and heading down the Champs-Élysées to Ladurée.  This place was famous for their macarons but they also had a darling little covered sidewalk café at this location which would be perfect for a late afternoon snack.  The place was full so we had to wait in line for a table.  There were only 2 people in front of us but it was taking FOREVER for tables to finish up in order to be seated.  The lady behind us had a baby in a stroller that screamed his head off the entire time we waited.  Mummy told Ms. Sandra that she thought she would GO MAD if that mother didn’t do SOMETHING to try and quiet him.  She just stood there talking to her friend like it was a perfectly acceptable thing.  OMGOSH!  I was trying to nap in my bag but the crying had waken me up so now I was looking around from my carrier bag and wondering what I was going to eat.  I do love a good macaron! I won’t lie to you.  The line moved forward at a snail’s pace and we were finally next in line.  We had been making eye contact with the host for over 30 minutes now… it’s not like he hadn’t seen us… there had only been two people ahead of us.  When we got to the front he looked at us and said, “I’m sorry, dogs are not allowed on the patio to eat.”  SAY WHAT?!?!?  We are in PARIS, FRANCE!  Dogs are allowed INSIDE almost every single restaurant in this city… we know this because we have dined in some of the finest ones here!!!  He told us again that on Ladurée’s OUTDOOR SIDEWALK CAFÉ, dogs were not allowed.  There were pigeons walking and pooping all under the tables of this sidewalk café… this was BY NO MEANS a sterile environment.  We weren’t even walking on the ground… we were inside a shoulder carrying bag!  Mummy and Ms. Sandra were furious.  We had waited in that line for over 30 minutes and the bad thing was, the host had seen us there, including us little doggies, but he waited until we got to the front of the line to say anything.  He said “sorry” again and motioned to the lady with the squalling baby to step forward… she could have our table.  The diners under the canopied tent all turned around as the miserably unhappy infant was wheeled into the tented area.  Their lovely afternoon would now be ruined by this screaming baby… but we, who were quiet as little church-mice had been denied admittance.  Mummy told the host that she would NEVER in her life put another Ladurée macaron in her mouth.  They should be ashamed of themselves for imposing such a silly rule in this city of all places.  I will tell you this, to this very day, Mummy has held true to her word and has never eaten another thing from that store… and she hasn’t bought another gift item from them either.  A TOTAL BOYCOTT was placed on Ladurée by our family.  There are HUNDREDS of excellent macaron makers in this city and Mummy would have no problem finding one.  We stepped across the Champs-Elysées and walked up to another sidewalk café where we were promptly seated with no questions at all.  We spent the rest of the day enjoying Paris and ended the night with a visit to the Eiffel Tower as it was lit up with sparkly lights for the evening.  Bri and I were having the time of our lives and we had only just begun to scratch the surface!