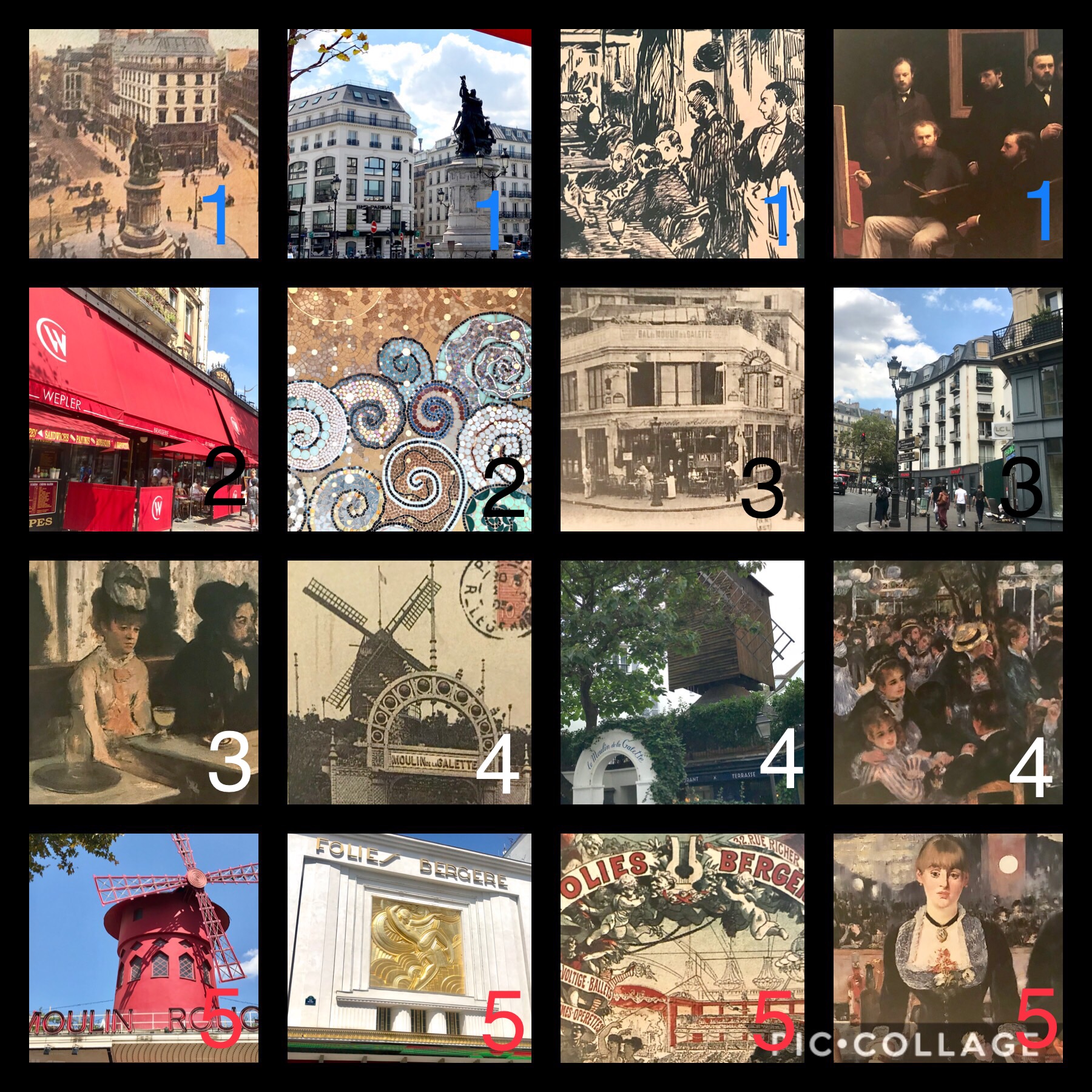 Well Mummy and I finished the LAST WALKING MAP in our guide book today, “The Impressionists’ Paris: Walking Tours of the Painters’ Studios, Homes and the Sites They Painted” by Ellen Williams. Map 4 covered the Montmartre area of Paris and was a challenging walk due to the cobblestone streets and VERY STEEP HILLS that needed to be climbed to access some of the sites… but what a GORGEOUS VIEW FROM THE TOP!!! Let’s start at the beginning though, where we started at Place de Clichy.

#1: The first photograph is taken from our book and is a postcard of how Place de Clichy looked in the 1800’s… Mummy’s photograph of the same spot is next. You can see how similar the area still is!!! The same statue is still there and a few buildings still look the same. During the days of the Impressionist painters, much rebuilding and renovation had taken place in Paris, making wider sidewalks for strolling… but this also gave way to the sidewalk cafés where people would sit for hours and just “people watch” much like today. After spending all day cooped up in their studios, these artists LOVED going out to the cafés at night and getting together with each other for laughs and drinks. Their favorite café was “Café Guerbois” where they would often sketch portraits of some of the regulars. The group would include Manet, who  was the center of the group and usually got them all together, Monet, Renoir, Degas, Émile Zola, Bazille and Fantin-Latour. Cézanne and Pissarro would stop in when they were in Paris! Can you IMAGINE such a group!!! The only known picture of the café done by these artists is the sketch shown next, done by Manet in 1869, called “At the Café.” The next painting is a photo taken from our book and done by Fantin-Latour in 1870, called “Studio in Batignolles.” Here he shows Manet painting a portrait with many famous others watching.

#2: As Mummy and I soaked up the area we stopped for a cool drink in the shade at “Wepler,” a famous place in Paris considered by many to be THE PLACE for oysters… but we just got water and a limonade. The inside walls are tiled in elaborate golden designs and are worth going inside for a peek if you were dining outdoors.

#3: The next stop was the site of the later favorite location for the Impressionists. As they got a little older, they wanted a quieter place and found it at the “Café de la Nouvelle-Athènes” on Place Pigalle. This area was Degas’ territory… he was born near here and would live in, or have studios in, about 8 different locations within 1/4 mile from Place Pigalle. The first phograph taken from our book shows a postcard of the café, and Mummy’s photograph shows the corner as it is today. Degas painted one of his best known paintings here, “Absinthe” in 1876… the next photo you see. In it were two people known by Degas… the man, Desboutin, a friend of the group, and the woman, Ellen Andrée (an actress who also posed for Manet and Renoir.) The picture is meant to reflect a morning, with the man drinking a popular hangover remedy called a “mazagran” which is black coffee and seltzer water… and her glass holding “absinthe,” which was a very addictive drink. The pale green color in the painting is the telltale sign of the drink. Many years later, Ellen Andrée would complain that Degas had made her and Desboutin look like two idiots in the painting, but many critics say that it is her slumped shoulders and look of utter hopelessness that have given the painting so much power.

#4: Up, up, up the hills of Montmartre we climbed… stopping at a café at the very top to get Mummy some water before she keeled over! DANG… maybe she should have worked on her “stair-stepper” a bit more before coming to this area!!! I got jostled around in my carrying bag MORE THAN ONCE… I’m not complaining… I just want you to know!!! ???? Anyway… there at the top was the famous “Moulin de la Galette.” You can see a copy of an old postcard in the first picture abd a photograph that Mummy took next. The next psinting was done by Renoir in 1876 and is called “Dancing at the Moulin de la Galette.” Mummy said if she could own JUST ONE PICTURE painted by one of these artists, THIS WOULD BE THE ONE she would want!!! She has fallen madly in love with it! It is located at the Musée d’Orsay so she said she might just pop over there and ask if they would like to part with it. Since she didn’t buy the “Little Prince” enameled box for 120 euros, she has a little extra cash to play with!!! Sooooo… we might be getting a new painting! Just sayin!!!   But here is the deal with this painting… the “Moulin de la Galette” was a popular outdoor dance hall where respectable working-class families would gather on Sunday to dance, drink wine and eat galettes (griddle cakes) made from grain that was milled at this location. The painting is a HUGE canvas, and for 6 months, Renoir lugged that thing back and forth to the dance hall and got to know the regular people… soaking up the atmosphere of the place. Many people believe that THIS PIECE is his masterpiece!!! One person decribed his use of light and color as being “like the shimmer of a rainbow.” The tiny picture we have included in this post doesn’t do it justice, so please Google this piece, as well as the others we have mentioned in the other posts, in order to see better photos of the works mentioned. Mummy will try to see this one in person!!! An interesting thing happened with this painting though… as I mentioned before, no one really liked the paintings done by these Impressionist painters back then, so they were always struggling to pay their bills. They had a rich friend in Gustave Caillebotte, who would often pay their rent or even purchase paintings from them to help support them… and he actually BOUGHT this picture from Renoir. When Caillebotte died 20 years later, Renoir served as the executor of his friend’s estate. He asked the Caillebotte family if he might have his picture back, and they said NO. Today, it hangs with all of the works that Caillebotte donated to the state.

#5: The picture we took of the Moulin Rouge speaks for itself. This cabaret-dance hall was founded in 1889 and that original house burned down in 1915 but reopened in 1921. This is the place where the “can-can” was born and was the beginning of cabarets all across Europe. Today it is a tourist attraction but back in the day it was a place to go to see “seductive dancing” …. although Mummy has been to the Moulin Rouge and can say that it remains PRETTY SEDUCTIVE TODAY, TOO! The extravagant acts were changed on a regular basis to keep the people coming back, and it worked. Toulouse-Lautrec was a popular artist here, and he painted many posters of the famous site.  Moving on over to the “Folies Bergère” in Mummy’s next photograph, (see next photo of an old poster taken from our book) was the site of Manet’s painting from 1882 titled, “Bar at the Folies-Bergère.” You will have to Google this work of art to see the entire painting, and notice that you can barely see the feet of a trapeze artist in the upper-left hand corner. The facade you see of the building today reflects the 1929 redecoration and not what it looked like in Manet’s time. This cabaret opened in 1869 and was a chic, sophisticated place where wealthy Parisians could enjoy circus acts, dancing troupes, vaudeville acts and operettas.  Guidebooks of the day warned tourists of the racy reputation of this establishment and it was assumed that the women who worked here had “second jobs” as prostitutes. Oh my!!! This painting was Manet’s last work before he died the following year.

Mummy and I walked across the street to the “Folie’s Cafe” for a cooling drink of water for me and a soda for her! Ahhhh… that hit the spot. We sat in the shade of the café and Mummy read her book while I took a quick nap. We hiked around Montmartre a bit and then hitched a ride on the cutest little tourist train that choo-choo’s you up and down the hilly streets. It dropped us right next to the Metro and in 30-minutes, we were back at the apartment yapping about our fun day! We hope that you have enjoyed our 4-part series reviewing our book that chronicles the lives of the Impressionist painters.

Oh thank you so much for sharing with us! O feel like I was there!

I so enjoyed this tour with you and Millie! Thank you so much.☺

Yes I have indeed enjoyed your tours. This one was my favorite. Poor mommy she had a tough day. I can relate. I could never climb to the top. Hugs

Hello from the States, I do enjoy reading your post they are quite interesting. Millie you try and talk to your mommy into writing a book, she makes everything sound so interesting. I miss your post on face book. Have a great, wonderful time in you have left in Paris.

Millie and Mummy thank you both for sharing your wonderful adventures! I live that your Mummy writes about it and it make me feel like I was there! LOVE going on adventures through your eyes! ???❤

Mummy & Millie LaRue your adventures are more and more interesting. I’ve been to Paris, France but your descriptions and journeys are beyond what I’ve ever remembered. Thank you for giving me back some of the Best times my Husband, Friends and I Ever had during our Military days in Europe. Loving Hugs ❤️?❤️

It has been a wonderful tour. And even extra special taking it with and Mommy. ❤❤

Stairmaster….bwahahaha! What a lovely walking tour!

Really enjoyed reading all about the Artists and your day Millie and Mummy and of course you made me laugh out loud a good few times too!!! 😀 xx

All this sounds so beautiful. Yes, Montmartre is a killer to walk. I love all the little shop and street artists. I could spend days there. One of my favorite spots.

I’ll have to look into this map and try it out. Thank you for sharing ❤️ Bisou