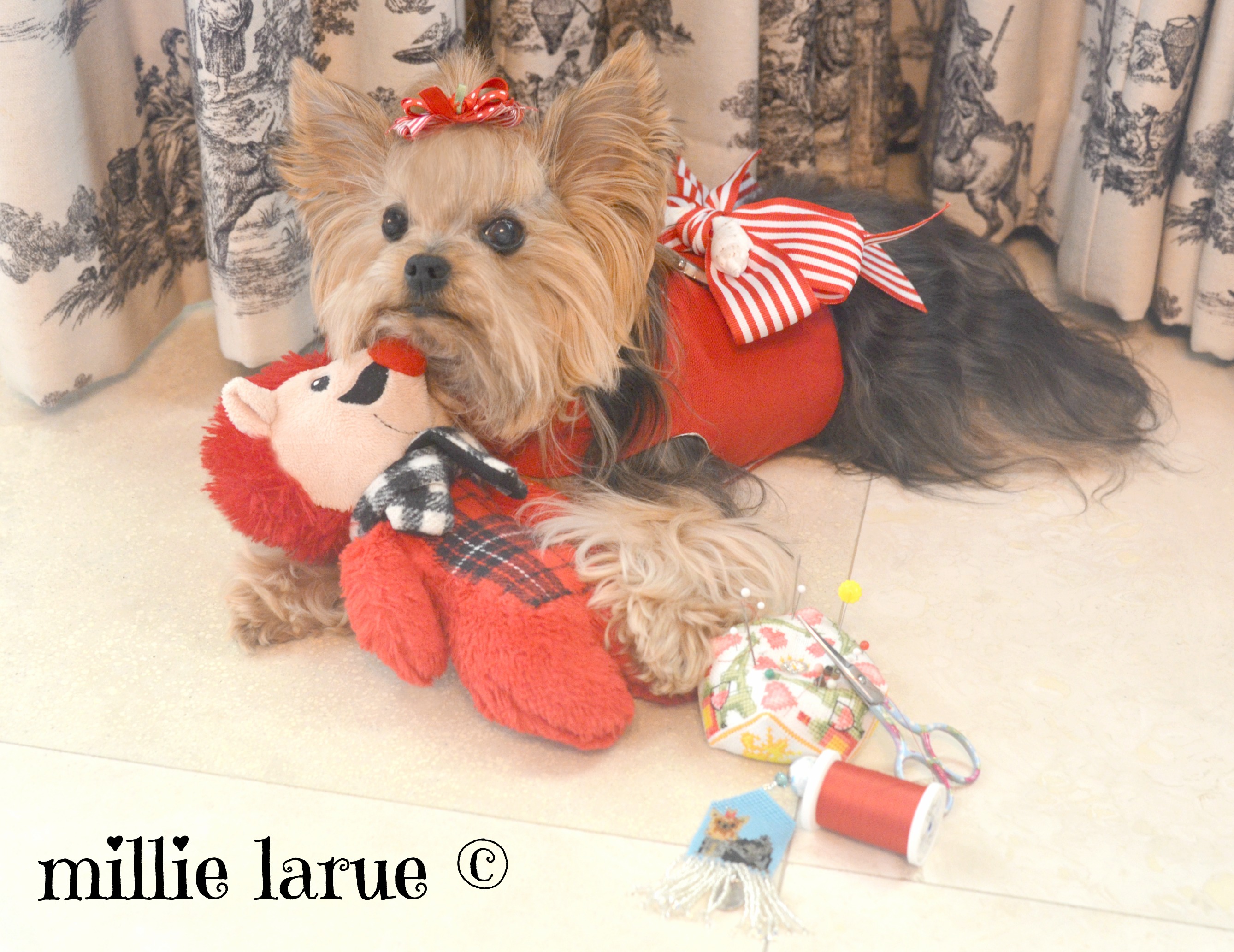 I only left Mr. Moustache alone for a few minutes while I went to get a few sips of water.  Honestly… I was gone less than a minute.  When I returned to the sofa, he was GONE!  I was spinning in circles looking everywhere for him.  Mummy INSTANTLY knew what I was looking for and she began to help in the search.  Perhaps he had fallen on the floor?  Behind the cushion?  Under the blanket?  No… he was nowhere to be found.  I was having a FULL-BLOWN PANIC ATTACK!  Daddy offered to help in the search but REALLY, Mr. Moustache cannot even walk so HOW could he have disappeared?  Where were my sisters???  Katie was asleep in her bed across the kitchen.  Addie Mae… where was she?  We soon found her on the screened-in porch asleep in a ray of sunshine.  Where was Tulip?  We called and called for her.  Soon we heard a faint squeak.  It was the squeak of Mr. Moustache’s insides… his little squeaky HEART!  Where was it coming from???  It didn’t take long to locate him AND Tulip inside her teepee and… GASP… she had ripped open his chest and removed his squeaky heart!!!  Leaving a grotesque, gaping wound, there was stuffing pouring from the hole.  I ran and grapped him from the teepee with a snarling yank and Mummy took him from my mouth saying that he required immediate surgury!!!  Fortunately, she keeps a little supply of toy “hearts” and had some extra fabric in which to repair his chest.  It was touch-and-go for several minutes, and I watched the entire procedure… whimpering the whole time.  Tulip didn’t even care, she just plucked another toy from the toybox and returned to her teepee as if life would go on.  Thanks to Mummy’s excellent medical knowledge, Mr. Moustache is good as new… maybe even BETTER, but I am still giving Tulip the silent treatment.

Tulip needs to learn about leaving someone’s personnel property alone! She is like my dog Babe, if there a squeaky inside it has to come out! She has done it to all her toys!

Oh my goodness!! It’s such a good thing that Mummy is a nurse! I’m glad to hear that surgery was a complete success. Kiss Kiss!

How dare Tulip take your Mr Mustache? Does she not realize he came all the way from Paris and is your friend, not hers? Of all the toys you girls must have and Tulip had to take your coveted Mr Mustache. That’s going to be hard to forgive, Millie, but you must in order to keep peace with your sister. Maybe there’s another toy you can gift her and forgive her with?? Have a good summer glam ping with your family. Sorry you’re not coming to Hiawassee, GA in your travels so that you can meet Mattie Mae. Well, maybe… Read more »

Wow Millie, so glad mommy’s surgery skills are quick and fast for Mr Mustache❤ I think Tulip might need her own special toy❤ Millie just forgive Tulip, she just likes playing with your Special toy🐾🐾🐾🐾

I give her the silent treatment too. My Mercedes does this to Benz toys but we don’t have a repair shop like you do. Glad Mr. Moustache is all fixed and as good as new.

Hysterical!…Ms. Millie I am SO glad Mr. Mustache is good as new, I know how much you love him 🙂

Millie, I am so glad mummy was there to operate and save Mr. Mustache. Please, don’t be mad at Tulip for long she probably didn’t realize she was playing so rough. Maybe Tulip needs a special toy that doesn’t have a squeaky in it. I am just glad all is well now.

Oh dear Millie how distressing for you & Mr Mustache. Thankfully Mummy was able to put him together her nursing skill cerrtainly saved the day. I hope you can forgive Tulip in the days to come .

Oh dear Millie how distressing for you & Mr Mustache. Thankfully Mummy was able to put him together her nursing skill cerrtainly saved the day. I hope you can forgive Tulip in the days to come .💖🐾

I love you all💗

Wow Millie. I’m so glad Mr. Mustache pulled through thanks to Mommy. Tulip needs to learn Mr. Mustache is off limits. Thank you for the fun update!

So happy to hear surgery was successful! Mummy is a great nurse!

Oh, my! I am so glad that your mummy was able to do the surgery on Mr. Mustache, and that he is okay now!! Your mummy is a wonderful nurse! 😘

Oh Millie
Im so glad Mummy was able to save the day for you and Mr. MUSTACHE. How in the world
Could you carry on without him.
Thank goodness Mummy found him.
Please dont be to upset with Tulip.
Maybe she thought she was baby sitting while you were getting a few sips of water.
Go easy on her. All is well now.
Love and hugs for all. Be safe!!

Maybe, just maybe, she knew his little squeaky heart was getting weak, so was trying to help??? Prob not, but maybe! Glad mummy is an excellent surgeon! And try and forgive your sister… 🤣🤣❤️

I am so happy Mr Moustache is doing ok after surgery. He will need a alot of bed rest and attention.

Tulip needs to be good

Prior to reading this, I thought Daddy had surgery. But a toy, nothing could be worse than that. Nurse Goodbody to the rescue. Glad all is well!!!

Millie, so glad Mommy came to the rescue and saved Mr. Mustache for you!!!

You are so lucky that Mommy is a nirse and practiced in rendering emergency services! And Tulip is fortunate that you are a forgiving sister…but I agree-she needs the silent treatment for now so she never ever does this again! I am glad all is going well now!

Oh Millie
I so glad you found me mustache before he had to go the Emergency Room.
Mommy is a great surgeon.
Tulip was just checking to see how Mr Mustache makes those squeaky noises.
Maybe when she grows up she’ll be a doctor!!

So glad your Mommy could rescue your Mr. Moustache and perform emergency surgery to repair him. As for Tulip, I expect she has already been scolded . Love to you all! Hugs ❤️❤️❤️❤️

So happy mommy could use her nursing skills!! ❤️🥰

Poor Mr Mustache! It’s rough being so adorable that you are irresistible to the ladies! I guess next time he’ll hide when you leave for a drink of water. I’m glad he’s all right baby doll!

OH MY GOODNESS!!! NOT MR. MUSTACHE!!!! I just GASPED with the horror of it all!!! Thank goodness your Mummy is a skilled nurse and could fix him right up! I’m just shocked that Tulip would harm Mr. Mustache my goodness! I’m hoping in time you will forgive your sister but I’d be very careful with Mr. Mustache in the future he is like no other! love to you little Millie I know how stressful this must have been for you. tsk tsk tsk Miss Tulip you really shouldn’t have taken Millie’s very favorite toy!

I’m sooo very glad that you found Mr Mustache and rescued him from your sister! We’ve had this same problem at our house. I (Mommy) had to stop allowing stuffy toys in the house anymore because of the problems they created. Now we have “unstuffies” and tied fleece toys. Everyone stays happy and nobody gets hurt including the toys 🧸! lol 😆

Millie you are so lucky your mommy is a nurse and knows how to sew. I hope you keep Mr. Moustache near by. 💞

So glad Mr. mustache us going to be ok!!!! Mommy is so talented!

Millie glad Mr Moustache is all fixed. he will need some rest before you can play keep him nearby.

Thank goodness all is well now. Millie please consider forgiving Tulip. I’m sure she didn’t mean to harm Mr Moustache. Your mummy saved the day and fixed Mr Moustache right up. He will need bed rest and tender gentle cuddles. Maybe find one of your other toys to give to Tulip. Just keep your eye on dear Mr Moustache.
An endearing story with a happy ending.
Sending all our love Cody & I.
💋 kiss 💋 kiss

Oh my goodness Mr Moustache has been through such an ordeal. Glad mummy was able to rush him to surgery. I can understand your being upset with Tulip, but don’t stay mad. Let Mr Moustache rest for awhile and keep an eye on him.

I am so glad mommy is a nurse and Mr Moustache is on his way to a speedy recovery!!

So sorry Millie but so glad mummy made Mr Moustache is as good as new! I love your
stories !

Awwwww so happy mummy saved Mt,Moustache,bless ur little heart, goood thing mummy is a nurse ,she k ow how to take action, shes talented,,love u all, pray u and Tulip make up soon, love u all ,God bless u all, pray the weather is not to bad ur way my son and his wife bought a condo in Gulf Shores they was gone last week,got up Sunday morning out ran the storm ,lord I was praying ,stay safe lots of love sent to all

Dear Millie, I am so glad that Mommy could give Mr. Moustache a much needed heart transplant. You have a very sweet Mommy. Forgive Tulip, she doesn’t discriminate on whose heart she rips out. 💖💖

Oh Millie Im glad Mr Moustache didn’t have to be on the heart transplant list forever and your Mummy was able to get a new heart fast! Your Mummy is a very special lady I hope you gave her lots of kisses! Tulip was a naughty girl but I’m sure she’s sorry and maybe she new his heart was getting bad! You never know. Im glad everything is back to normal now and I hope you and Tulip can make up soon.
Love you little one. Have a good weekend. Kiss Kiss Love Kay Sheets

Thank goodness Mommy has medical expertise and was able to perform emergency surgery on Mt. Moustache. Praying he is all better. Now, Millie, you need to give your sisters a very stern “paws off” f Mt. Moustache. He’s special and he’s all yours. After all, you stole him from your best friend, Brie, and she let you keep him. ❤️❤️❤️

Oh my, that was sooooo naughty of Tulip. But please do forgive her. I’m sure she didn’t really mean to hurt him. I’m guessing she just got overexcited about having him available. Love to all of you. Sure do miss seeing you on FB…❤❤❤❤