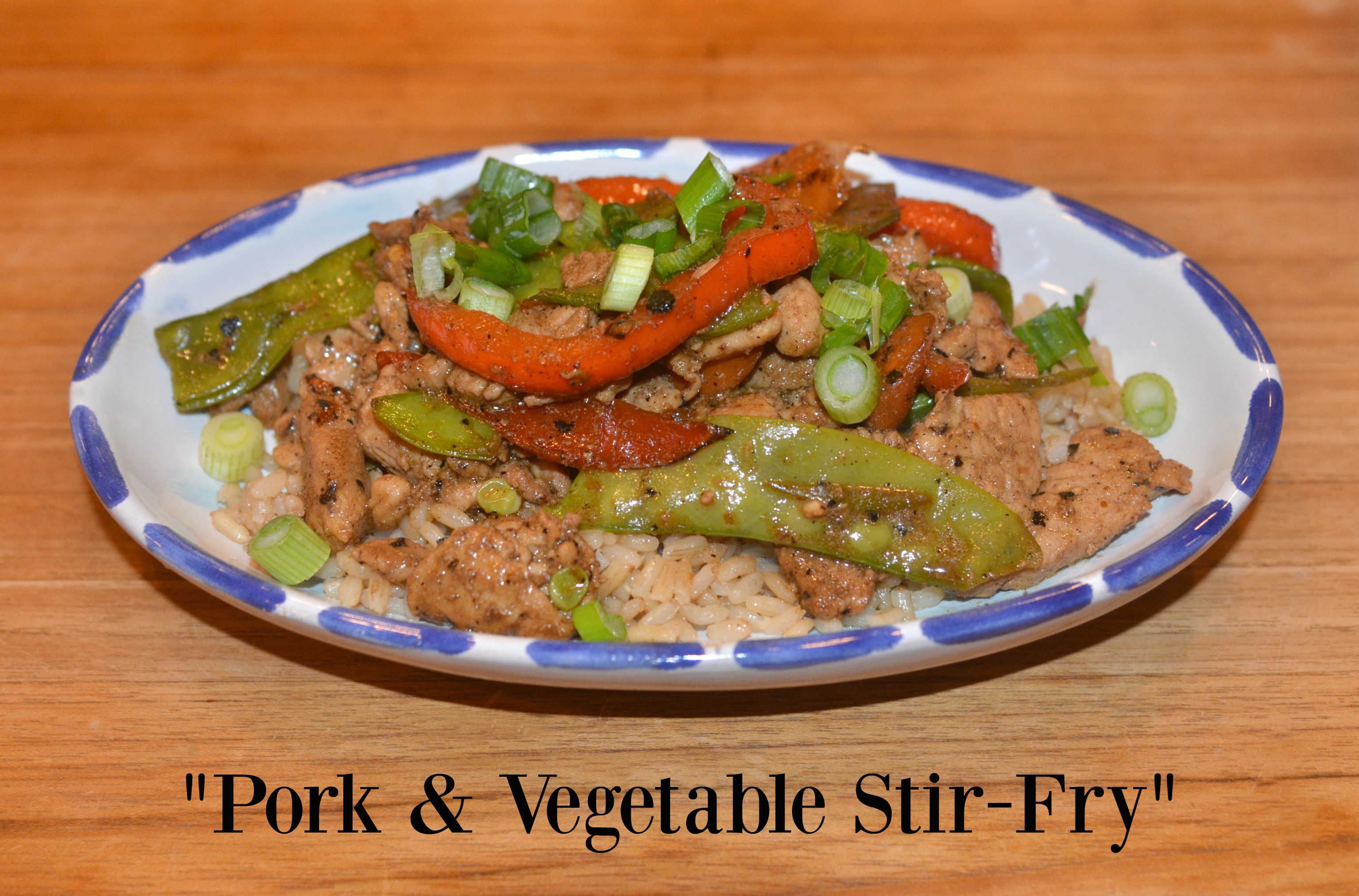 Yesterday, I told you that I was helping Mummy look for new low-calorie recipes. We found a great one that you might enjoy for your family! It was a BIG HIT over here. It is from a “Weight Watchers, Best Ever Magazine” but don’t let that scare you off… Mummy said it was full of flavor!!! Try it for yourself. It is for HUMANS and contains ONIONS so we doggies didn’t eat any of this. You can eat this ANYTIME. You don’t need to be dieting!
.
“PORK AND VEGETABLE STIR-FRY”
.
2 Tablespoons low sodium soy sauce
1 Tablespoon rice vinegar
1 teaspoon cornstarch
4 teaspoons light brown sugar
1/4 teaspoon red pepper flakes
2 teaspoons minced garlic
1 teaspoon minced fresh ginger
12 ounces trimmed pork tenderloin , thinly sliced
1 Tablespoon canola oil
3/4 cup diagonally sliced carrots
3/4 cup sliced red bell pepper
1 cup snow peas
1/4 cup sodium-free chicken stock
2 (8.8 ounce) microwave brown rice… or make your own
1/4 cup thinly sliced scallions
.
In a small bowl, whisk together the soy sauce, rice vinegar, cornstarch and 1 teaspoon of the brown sugar. Add the red pepper flakes. Set aside.
Stir together the garlic, ginger, and remaining 3 teaspoons of brown sugar. Add the sliced pork and toss to coat. Heat 2 teaspoons of the canola oil in a large skillet or a wok over high heat. Be careful not to burn this! The heat needs to be high to sear the pork quickly… just keep stirring everything!!! Turn the heat down a LITTLE if needed. Place the pork mixture in the skillet and cook until brown, but center is slightly pink… stirring often…about 3 minutes. Transfer this to a plate.
Heat the remaining 1 teaspoon of canola oil in the same skillet or wok. Add the carrots and bell peppers. Cook, stirring often until mostly tender… about 4 minutes. Add the snow peas and continue cooking until tender-crisp, 1-2 minutes. Add the chicken stock to the skillet or wok and cook, stirring and scraping to loosen the little brown bits in your pan. Cook until almost evaporated…about 1 minute.
While this is cooking, heat the rice according to the package directions and keep warm.
Add the soy sauce mixture to the skillet or wok and stir constantly until boiling. Add the pork to the mixture and stir to combine. Remove from heat.
Serve over the rice and top with the scallions.
.
Serving Size:1 cup pork mixture and 1/2 cup rice
Calories: 384
Fat: 8.2g
Protein: 24g
Carb: 45g
Sugars: 6g
Chol: 55mg
Sodium: 373mg
.
(Serves 4)