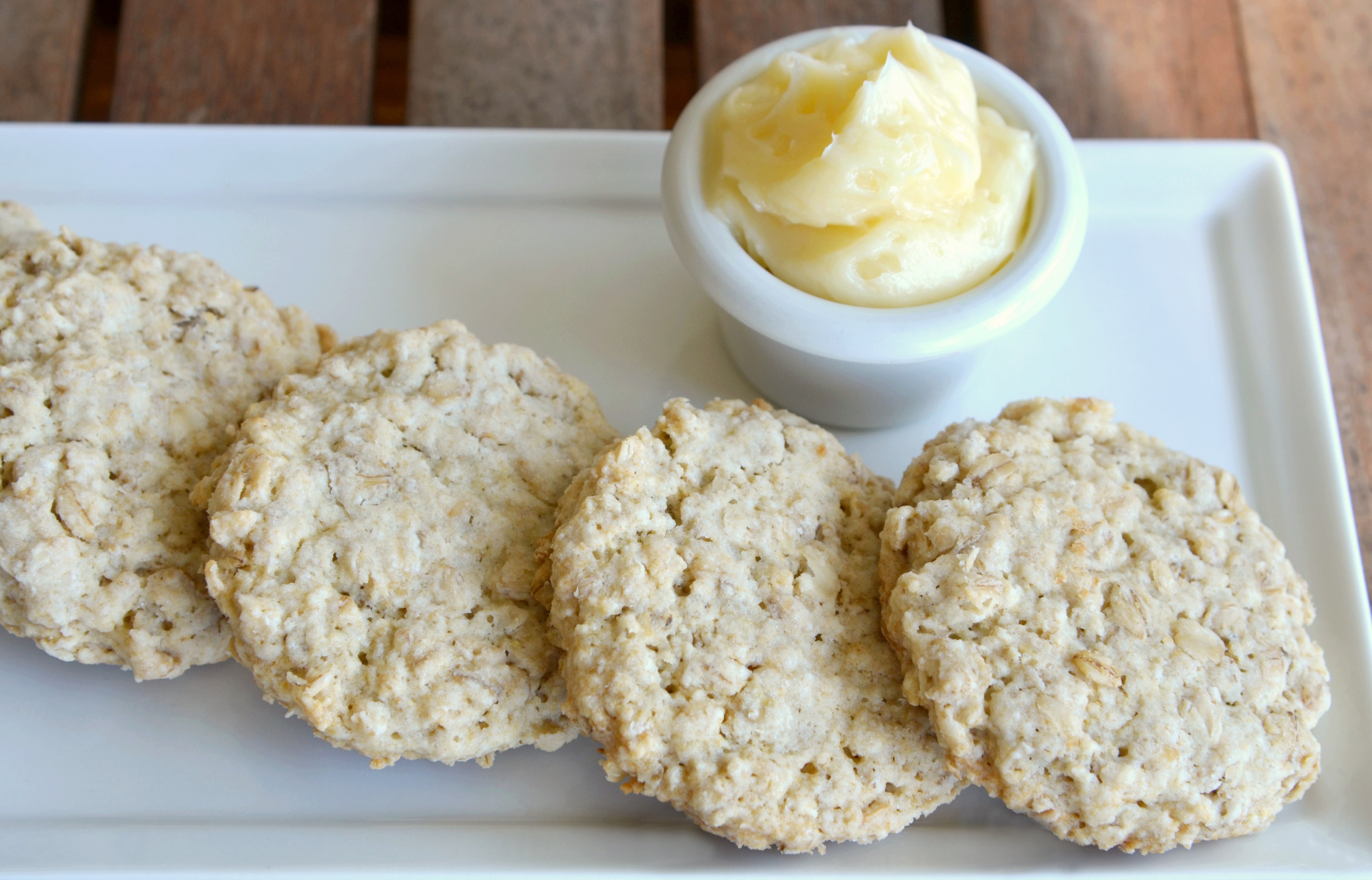 Mummy took a cooking class recently where she learned how to make these delicious little “oatcakes”.  Having never had them before, she learned that they have quite a long history.  These slightly sweet little rounds are a cross between a cookie and a cracker…some even resemble a pancake.  Recipes for these delicious bites are endless, but you will love this one!  Oatcakes originally began in Scotland, being documented as far back as AD 43!  They are said to be the “mainstay of Scottish breads for centuries” and were traditionally eaten with every meal.  They are commonly served alongside soups, meats and fish dishes…and they are often used in place of toast for breakfast, by spreading with a little butter and jam.  Try adding a little shredded cheese on top and lightly placing under the broil for a few seconds for a yummy snack.  However you choose to eat YOUR oatcake, you won’t be sorry you tried these.

Preheat your oven to 350 degrees and grease 2 large baking pans or cover with parchment or a Silpat mat.

Place oats in a large bowl.  Sift your flour, sugar, baking soda and salt into the same bowl with the oats.  Using a food processor or mixer, cut in pieces of the chilled butter until it resembles coarse meal.  Add the buttermilk and stir until a nice dough forms.  Dump your dough onto a floured surface and roll out to 1/4-inch thickness.  Use a 2-inch round cookie cutter to cut into circles…you can make smaller sizes if you like.  You can make very tiny circles and use them as a base for an appetizer, using an assortment of toppings of your choosing.  DELICIOUS PARTY IDEA!  Place them on the prepared baking sheets a few inches apart.  Gather up scraps and re-roll to use up all of your dough.  Bake oatcakes for about 12 minutes, or until the edges are a pale golden brown and they are getting slightly firm on top.  Transfer oatcakes to a wire rack to cool.  Store in an airtight container.

NOTE:  I served mine with a honey butter that was made using softened butter and a little honey to taste.  I think these taste very similar to an oatmeal cookie, but not quite as sweet and a little crispier.  They were simply delicious and sooooo easy to make.

Can’t wait to try these. Love mine with homemade raspberry jam! Or with jam & cheese!!