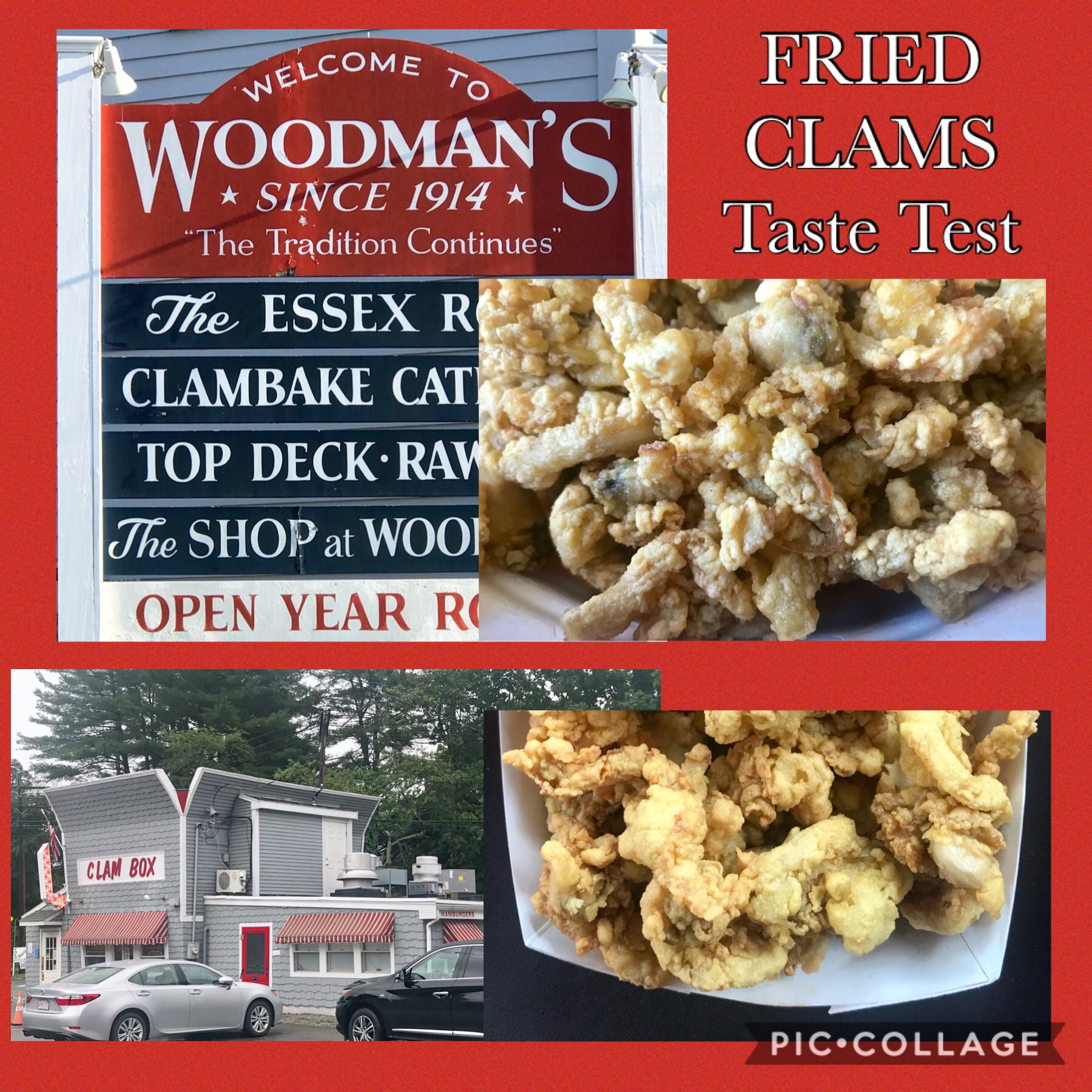 Mummy and Daddy have embarked on another TASTE TEST, but this time it’s for the BEST FRIED CLAMS! Cape Ann is FAMOUS for their fried clams and everyone serves them… but there appears to be two establishments that are the top fried clam sellers so they just sampled those. We will give you a little history on them.

1. WOODMAN’S of Essex was established in 1914 and they were actually the INVENTORS of the fried clam on July 3, 1916!!! It happened innocently enough when they were frying up a batch of their best-selling potato chips and a local customer suggested they try frying a clam for fun!!! The rest… IS HISTORY! The next day when the 4th of July parade marched past their stand, they were ready with a batch of their newly invented FRIED CLAMS… and the appetite for them has gone crazy ever since.

2. THE CLAM BOX of Ipswich is a nationally recognized landmark and has been a New England tradition for over 80 years. The unique structure, that is shaped like a clam box, was built in 1938 and has been featured in many magazines and TV shows. They didn’t INVENT the fried clam but they do claim to have PERFECTED it!

As usual, Mummy and Daddy couldn’t agree on a winner. Mummy said they were BOTH GOOD but Daddy said that he preferred THE CLAM BOX, saying that they had a crispier coating, which Mummy had to agree they DID… but she thought that MAYBE the batter itself was a little better tasting at WOODMAN’S. So there you go… I think that if you go to either one, you will be happy with your fried clams. I hope that you enjoyed reading the information on the FRIED CLAMS and we will continue to bring you more taste tests as they come up in our trip.?❤️??

My mummy loves fried clams! We will try them both if we get up there and I will let you know which one I like best! Ummmm if mummy lets me taste them! Are they doggy friendly??? They should be!

The CLAM BOX has an outdoor covered picnic table area that is suitable for your doggies but WOODMAN’S only has ROOFTOP outdoor dining and I don’t know if they allow doggies up there, we were not with our parents on that day because they had been touring more MANSIONS! We did NOT taste any of the fried clams because Mummy thought they might make us sick since we have never had those before.

Thank you for the information. Did you girls get a taste?

No… Mummy wasn’t sure we should have any since we have never had them before. But they sure SMELLED GOOD!

Fried clams with belly’s is the best! Girl from Newport RI

Oh my that is exciting, i love fried clams ,u have been tonthe places where they actually started from they have to be the best ever WOW!!!!!im so glad u have all these memories and adventures, its so wonderful,i love, hearing about ur taste experiences,,have a blest day today ,stay safe love u all,hope u beautiful girls get some great tastes,of some good things today too,

They were very good! If you ever get this way you need to try them. ?❤️??

Ohhhh have fun in Cancun! I bet it is soooo pretty there! ??

Thank y’all so much for the tips on what to eat at the places you visit!! You make them all sound so mouth-watering!!! I know you girls and Mommy and Daddy are having a great time!!! I love your adventures!! Have a great day and I look forward to your next post!!
Sherri Davis

Thank you for following along with us this summer! ??

Good Morning …Clams sound so good…did you and your sisters get to have a bite? Continue on have fun and be safe.

We did not get to taste them since Mummy wasn’t sure about us eating them. We have never had them before and she said she didn’t want 4 sick yorkies. ????

I love fried clams, but can’t find them any where close to home.

Every single place up here has them…. Cape Ann is FAMOUS for the FRIED CLAM! Lol

You would be in heaven up here then… they are EVERYWHERE!

I am Truly not a Clam eater but y’all make them sound absolutely delicious. Glad your Mummy and Daddy are enjoying their vacation together. You girls being with them makes the adventures even more Entertaining and Loving. Keep enjoying and stay safe during your travels. Can’t wait to read the next adventure story.

Mummy and Daddy don’t ever order these at home, but they had to order them here since they are soooo famous!!!

Yummy yummy !! Did you baby dolls get to try some, a taste test perhaps!!!

We didn’t get a taste… but we are holding out for more lobster! We know we can eat that!!!

Waking up on the east coast and having such fresh and yummy seafood makes my mouth water.

I bet both were super tasty! And I don’t even eat clams!

My friends prefer The Clam Box. I have only eaten at Woodman’s. So envious of your trip. Yum yum yum.

It has been a TASTY TRIP! ?

THANK YOU FOR THE LATEST UPDATE ON YOUR TRAVELS, PRETTY PUP. I WILL TAKE RAW CLAMS.

Ohhhhh I bet that you LOVE clams!!!

OH NO! Not into clams! Maybe fried is different ?

They have never eaten RAW clams…

They said they were both really good! ???

Our parents thought they were really very good!!!!

Your in my neck of the woods…..grew up in Boston and spent allot of time on the North Shore! I miss the clams so much….have a great time..

They sure have some MIGHTY FINE FOOD up here! ????

Now you mommy has made me hungry. I’m about to have taco’s at the Police Station and meet all our volunteer Champlain’s.. I’ve work with a few already. I love the taste test between mommy and daddy, and love the history lessons. Thanks. With love and hugs.

They are delicious especially in that part of the country! Glad you all enjoyed them!

Thanks for keeping me in the loop on your adventures! Glad they enjoyed the clams.

Oh thank you so much for that information, Millie. I always wanted to go to Cape Ann. Hopefully someday I will

You will love it here and the people are so kind and welcoming! ?❤️??

Hello, everyone in the Airstream. Those fried clams look delicious. The story of how they came about is so interesting. Isn’t it funny how something delicious can come from an accidental occurrence. We certainly enjoy your adventures. Enjoy you trip and be safe.

We love to find out all of the stories about the places that we visit and share them in our posts. ?❤️??

Thanks for the history of fried clams! I don’t eat them but I’m glad you liked them!

Mummy and Daddy have enjoyed trying the different foods at all of the places we have visited. ?❤️?

I haven’t heard anything from you since Thursday. I just wanted to make sure I am still on your list and that everyone is okay. Millie.

Awwww man… something is wrong with our email notification system so everyone will need to just come here and scan thru the TRAVEL POSTS for updates. Thanks for checking on us though… we are trying to figure out what is wrong but no luck so far. ???

They really enjoyed them ??

I’ve never eaten clams you all are so adventurous! I prefer fish more than seafood… my favorite is haddock! I’ve never visited the New England states when my family traveled we always went south…. Virginia Beach…… Myrtle Beach……. Florida…… we vacationed a lot in Atlantic City growing up.

Mummy and Daddy are enjoying all of the food testing!